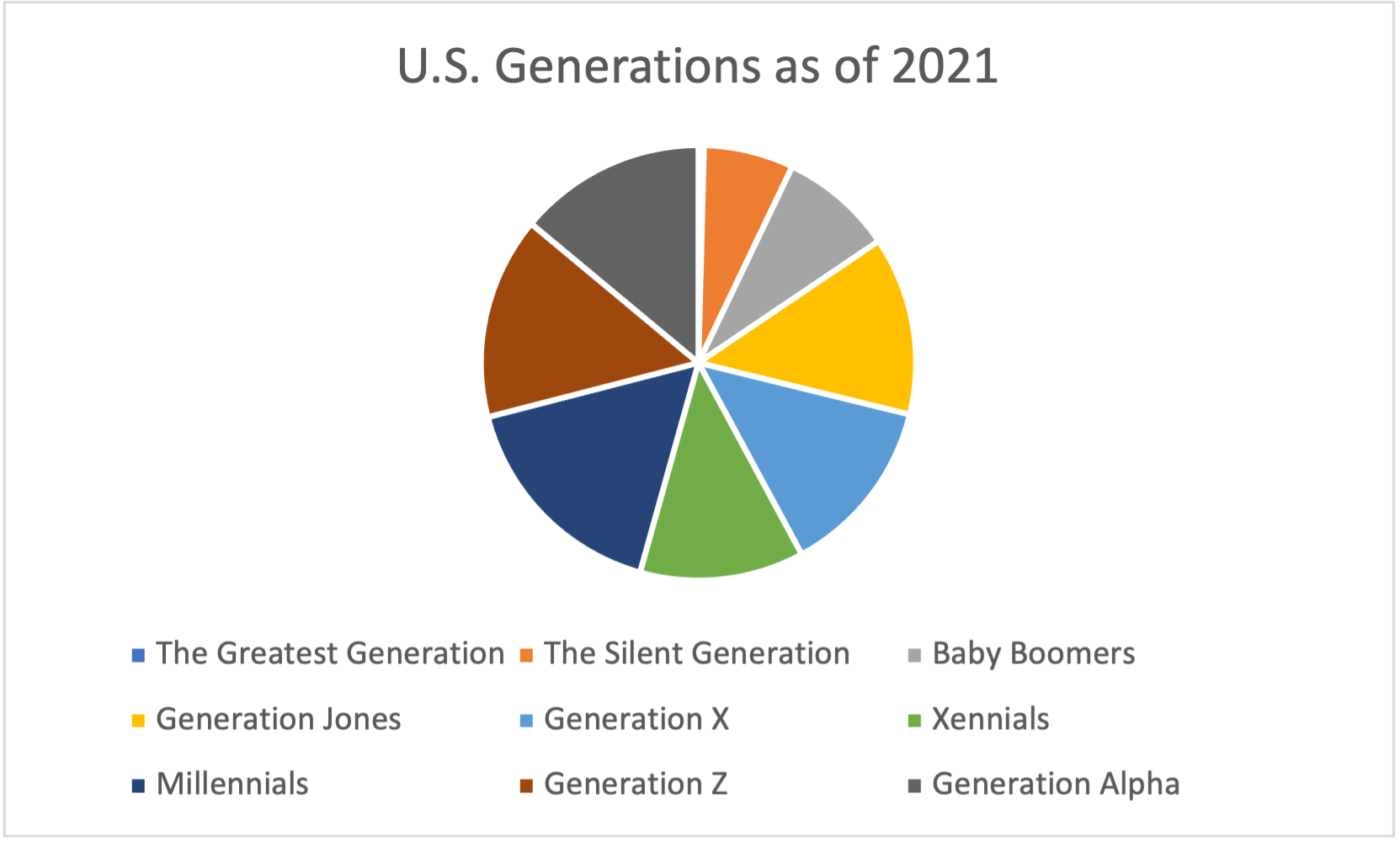 Back in the mid 1800s, Europeans created the idea that we each share something important with people born around the same time as us. Today, we often hear and read about Baby Boomers, Gen Xers, Millennials and Gen Zers. But how do we define the generations of our ancestors? Or my parents, born in the mid 1930s and teenagers during World War II? Or our children and grandchildren? And what about the micro-generations we hear about from time-to-time, like Generation Jones and Xennials?

Although modern discussion of generations seems always to start with the Baby Boomers, I searched for deeper information about all the generations who have influenced people living today. What follows here is a compilation of information I found from various resources.

The Silent Generation: In the United States, the after-effects of the Great Depression of the 1930s and World War II in the early- to mid-1940s led people to have fewer children. As a result, the Silent Generation, born between 1928 and 1945, is comparatively small. Sometimes called the “Lucky” generation because of their fortunate timing, the Silent Generation reached adulthood in a booming economy. As they grew up, the Silent Generation worked within the system keeping their heads down and playing life safe earning themselves the “silent” label. Upon coming of age, the Silent Generation fought in the Korean War, married earlier than any other generation before or since, created the rock and roll music of the 1950s, formed the leadership of the Civil Rights movement, and comprised the “silent majority” that brought John F. Kennedy to the White House. You may be as surprised as I was to learn that Muhammad Ali, Bob Dylan, Martin Luther King, Jr., and Jimi Hendrix were all members of the Silent Generation, as well as my father, Richard Preston Krecker, who was among the first to bring IBM computer mainframes to the commercial market in the computer-illiterate world of the 1950s.

Baby Boomers: The Baby Boomer generation is usually defined as people born during the dramatic baby boom between 1946 and 1964. The Baby Boomers were named for the dramatic uptick in birth rates after the Silent Generation’s slowdown. However, this is a demographic definition of this generation, not a qualitative definition. New thinking is redefining this generation as those born between 1945 and 1954, sometimes referred to as the early Boomers. The early Baby Boomer cohort is characterized by a world that was wildly shifting as it came of age. The role of women changed dramatically, and the rise of counterculture caused early Boomers to rethink their role in the world. As the Baby Boomer generation lived through the Vietnam War, the military draft drove youth to action. There is also an innocence to this segment of the Baby Boomer generation: the economy was thriving, and the innocence of Woodstock and total lack of sexually transmitted diseases led to rock and roll music and the “free love” movement.

Generation Jones: Born after the Vietnam War, between 1955 and 1968, Generation Jones, a micro-generation, and a subset of both the Baby Boomers and the earliest of the Generation X, became adults in the 70s and ‘80s amid skyrocketing unemployment and high interest rates making home buying a distant dream. Originally this generation was simply rolled into the Baby Boomer generation, but 80% of its members never identified with Boomers, leaving them largely undefined for the better part of their lives. Its popular culture is characterized by the sharp contrast between the dreamlike music of Led Zeppelin and the dirty dancing of the movie Flashdance. By the time Generation Jones came of age, HIV and sexually transmitted diseases halted the “free love” movement in its tracks. The classic swing voters, Generation Jones ranges from the right to the middle and, increasingly, to the left in reaction to the growingly extreme nature of Republican politics. Crucially, experts attribute the rise of George W. Bush, Barack Obama, Donald J. Trump, and President Biden to the White House to Generation Jones as the key swing voters who landed these high achievers into office.

Gen X: Sandwiched in between the Baby Boomers and the Millennials – both much larger generations – Generation X, or Gen X, saw both earnings gains and the cost of college soar. Born between 1965 and 1980, college tuition for this generation far outpaced inflation and median income growth, and student debt grew exponentially. Because median wages for men have been nearly flat for the past 20 years, the added earning power of women has been critical to the success of this generation. Unlike previous generations, which offered the possibility of financial security to blue collar workers, Gen Xers are the first cohort to experience a labor market that practically demands postsecondary education for economic success.

Xennials: A micro-generation overlapping both the Gen X and Millennial generations, Xennials were born between 1977 and 1983. Similar to the experience of Generation Jonesers, Xennials never felt like they were part of either Gen X or the Millennials, and yet they encompass elements of both. According to Sarah Stankorb, who was the first to write about Xennials, “We landed in a fleeting sweet spot before the recession that plagued Millennials’ launch.” When the market crashed in the early 2000s, Xennials were still young enough that they could go to college, get jobs, quit them, and get new jobs, eventually finding the beginnings of financial success before the economy truly tanked in 2008.

Millennials: Also known as Generation Y or Gen Y, this generation was born between 1981 and 1996, and reached adulthood starting in the year 2000 – hence its moniker, the Millennials. Although Generation Jones invented the internet, Millennials grew up smack in the middle of the internet age and first carried cell phones while in middle school. Much like their parents in Generation Jones, Millennials have endured significant economic disruption since starting their working lives. Many faced unemployment because of the Great Recession of 2008. Next, they suffered through another recession in 2020 due to the COVID-19 pandemic. Millennials are even more populated by working couples than previous generations, particularly couples with male members of the family who are taking the lead in child-rearing. Millennials postponed marriage and are having fewer children than any of their predecessors.

Generation Z: Born between 1996 and 2009, Generation Z, also called iGen or the Zoom Generation, are the younger siblings of Millennials and are credited as true “digital natives” because they were born into a completely digitized world. They came of age post-9/11 and after the recession of 2008. While Generation Z may have more advanced education and more money than any previous generations we know, they also possess far more college debt. According to Joe Pinsker, “Socially and politically, they’ve been referred to as ‘millennials on steroids,’ exhibiting many of the same progressive beliefs regarding globalization, inclusion, technology, and religion.”

Generation Alpha: Sometimes called Homelanders, these children of Millennials and the younger siblings of Generation Z, Generation Alpha includes people born in 2010 and is projected to last until 2025.  It’s entirely possible this definition becomes further refined over time, or perhaps even subdivided into microgenerations, given the fast-paced cultural changes we see today. Generation Alpha, a term first coined by Mark McCrindle in Australia, is the oldest generation to never recall financial prosperity since the crash of 2008. They will grow up to be the best-educated generation ever, the most technologically immersed, and likely the wealthiest, depending on what happens next in the world. They’ve spent more time at home than any other generation, hence their nickname: Homelanders. Gen A doesn’t mail cards or letters, due to ubiquitous email and internet resources, and they don’t go to gyms, thanks to cyber personal trainers. Even hotels are at risk with VRBO and AirBnB absorbing most of the travel dollars of young adult Generation Alpha members. A branding agency recently polled 7- to 9-year-olds and concluded that Generation Alpha “cares more about all issues than their Millennial and Baby Boomer [predecessors] did when they were kids, or even than they do now.” However, it’s hard to know if this name for the generation will hold over time. In a heart-wrenching contrast to the Greatest Generation, I recently heard a Generation Alpha child from Uvalde, Texas, say to a newscaster that she thought her generation should be called the Mass Shooting Generation.

The rest of the story

Fascinated by my own family’s history since our early members first arrived on the shores of what we now call the United States of America, I sought more information about bygone generations. Lo and behold, historians have taken the time to define all generations from early America through today. For an extensive list of American generations since the 1600s, click here.

Laskow, Sarah. (2014, September 11). Generations Are an Invention—Here’s How They Came to Be. The Atlantic.

Miller, Ryan W. (2018, December 20). Are you a Xennial? How to tell if you’re the microgeneration between Gen X and Millennial. USA Today.

Pinsker, Joe. (2020, February 1). Oh No, They’ve Come Up With Another Generation Label: How much do members of “Generation Alpha,” or any generation, really have in common? The Atlantic.

You may already have noticed that the cutoff point for each generation in the chart used to identify this blog post on the blog landing page is anything but an exact science. The chart represents a general timeline of generations in the Western World. Using the original SVG file, which can be found on Wikipedia, click on the chart, then hover over a generation to highlight it and learn more.

The crude chart that heads this blog post was created by me using an estimate for each generation and micro-generation based on information about the current population of each of these generations obtained from Statista including these two charts: Number of births in the United States by 1990-2020 and Crude birth rate in the United States from 1800 to 2020. Remember, much like my chart, precise definitions of each generation are in fact imprecise. Note that I also eliminated the crosses between each generation in creating this chart. Albeit imperfect, this is the best estimate of each generation I could obtain without spending a small fortune joining private sites to download more precise information.

By viewing this chart, you can see clearly that all of the generations and micro-generations today that are either in school, getting ready to join the workforce, or actively working today are roughly the same size.

Thank you for your patience. I hope you find these charts as informative as I did.